(June 2022) - As Pride Month 2022 begins, Lewis Brisbois looks forward to honoring our LGBTQ colleagues and the LGBTQ community at large with a month-long spotlight series during which we will share reflections from LGBTQ members of our Lewis Brisbois family. These individuals will share their experiences and insights regarding mentorship and other important themes. To kick off our celebration, we invite you to read a message from the Co-Chairs of Lewis Brisbois’ LGBTQ Affinity Group, Hartford Managing Partner Angeline Ioannou and Denver Administrative Partner Jon Olafson. Happy Pride Month! 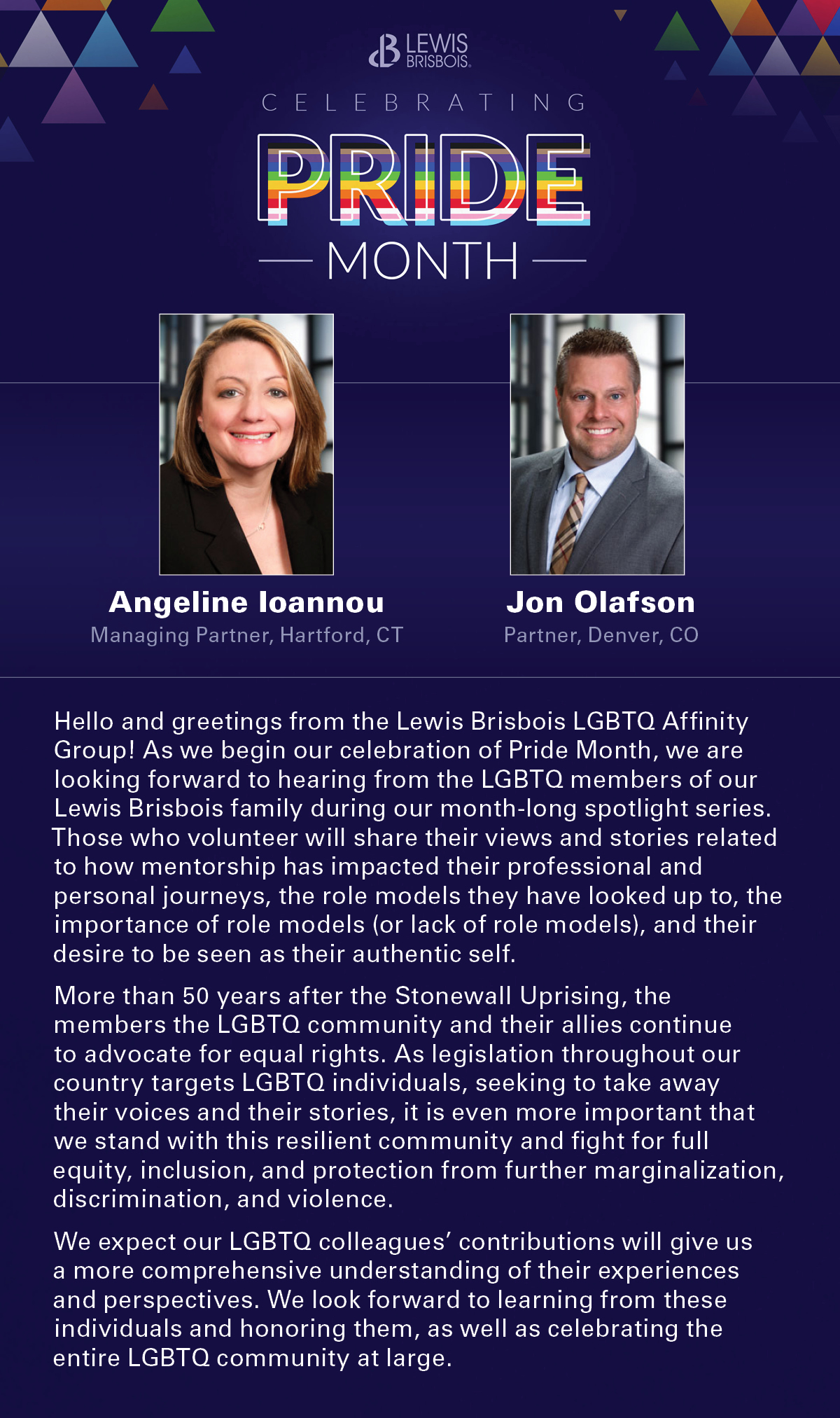 The first contribution in our Pride Month spotlight series comes from Denver Administrative Partner & LGBTQ Affinity Group Co-Chair Jon Olafson, who discusses the various challenges he faced when growing up, including a lack of visible role models. He therefore encourages allies of the LGBTQ community to be “vocal and visible” in their support, which he notes is particularly important in light of the current negative national discourse around LGBTQ issues.

Jon is a member of Lewis Brisbois' Labor & Employment and Trade Secrets & Non-Compete Disputes Practices and a founding member of the firm's LGBTQ affinity group. In his legal practice, he regularly counsels business clients on a variety of regulatory and dispute resolution matters. 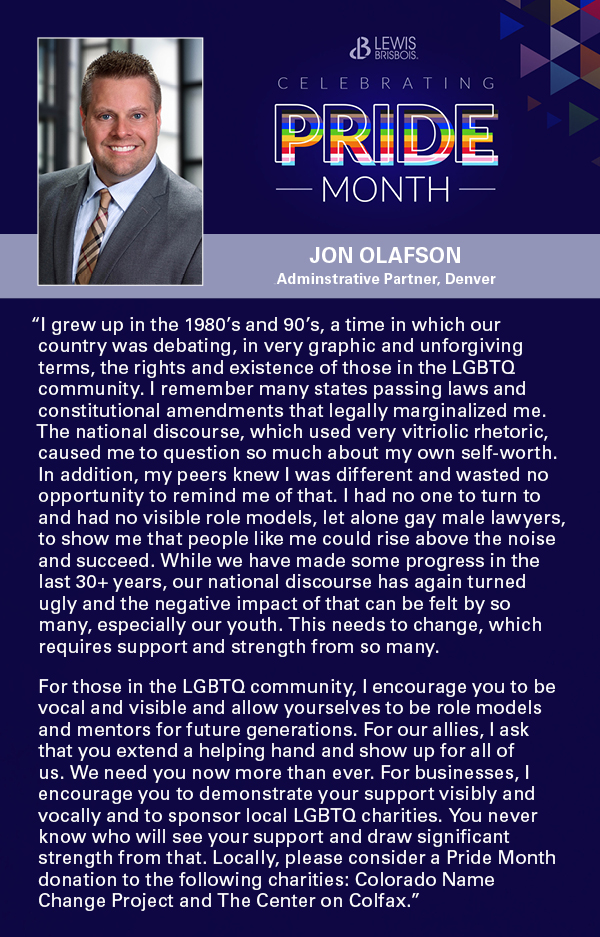 As our Pride Month spotlight series continues, we hear from Houston Partner Al Durrell who discusses the importance of working in an environment that promotes diversity and inclusion. He also describes how mentors and allies at Lewis Brisbois have allowed him to be himself – something that he hopes to do for others.

Al is a member of Lewis Brisbois’ General Liability Practice. Over the course of his career, he has litigated and tried numerous cases across Texas, successfully representing a number of Fortune 500 companies in complex litigation matters. Learn more about Al’s professional background here. 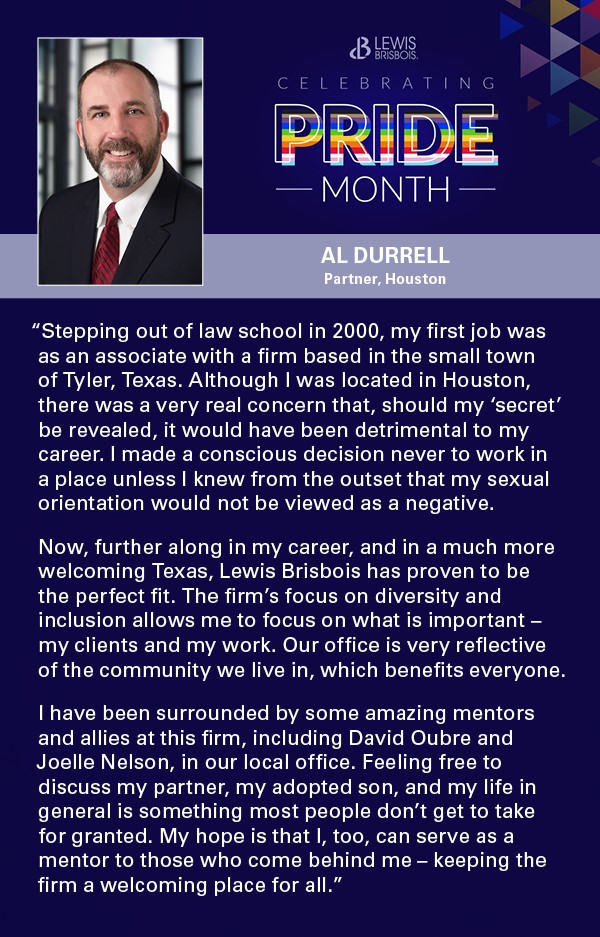 The next contribution in our Pride Month spotlight series is from Chicago Conflicts Analyst Neal Darrah who discusses his positive experience at Lewis Brisbois when he came out as trans and began using a new name and different pronoun set. He expresses his gratitude for the support and acceptance that his colleagues have demonstrated throughout the process, describing that it has felt “amazing.”

Neal has been with Lewis Brisbois for almost 4 years. As a conflicts analyst, he plays a key role in opening new matters and cases for attorneys, streamlining the process and ensuring compliance with all relevant regulations. 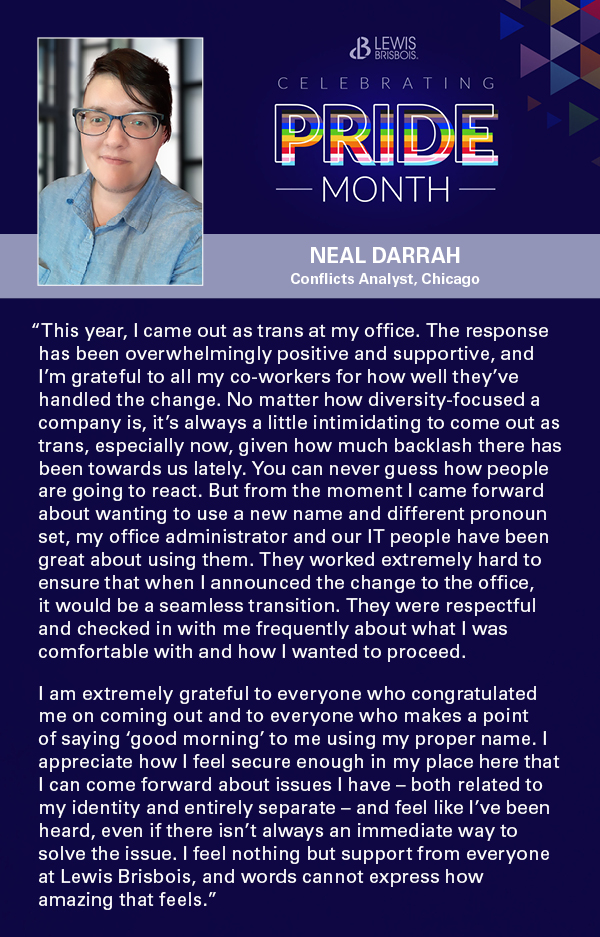 Next in our Pride Month spotlight series, we hear from a longtime ally of the LGBTQ community, New York Partner Steven Beer, who describes his 20-year history playing for the New York City Gay Hockey Association (NYCGHA), an organization dedicated to sportsmanship and fair play. Steven, who marches with NYCGHA in the NYC Pride March each year, invites his colleagues to join him on June 26. 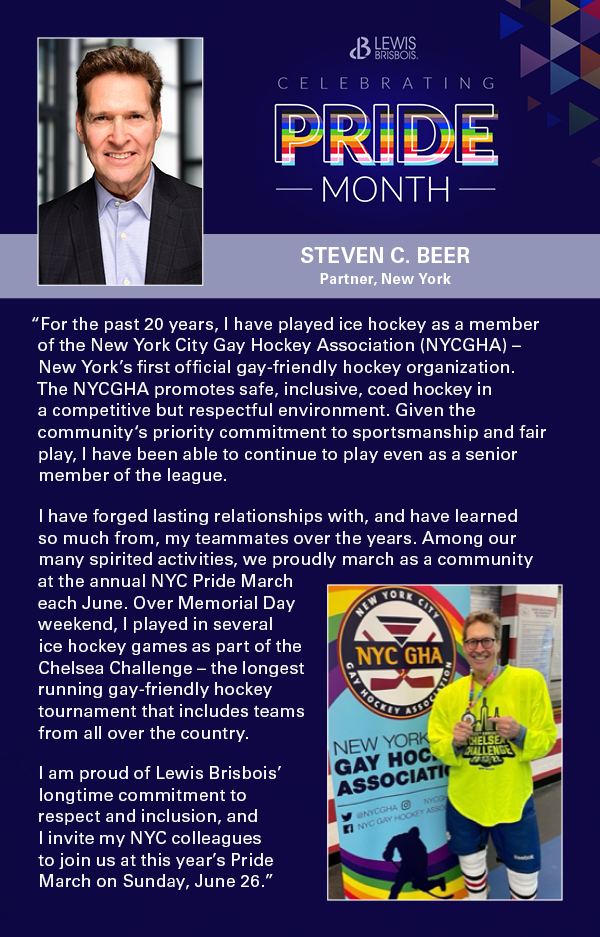 As we move into the second half of our Pride Month spotlight series, we hear from Los Angeles Partner Dean McVay, who describes that having LGBTQ role models who were “out” allowed him to find his own way. Dean also notes the positive impact that LGBTQ allies have had on his experience and describes his desire for the future to be “more positive and affirming” for LGBTQ youth.

Dean is a member of Lewis Brisbois’ Healthcare and Insurance Coverage Practices. He has over 30 years of experience in civil litigation including health care litigation, insurance coverage and bad faith, real estate, and commercial litigation. Learn more about Dean’s professional background here. 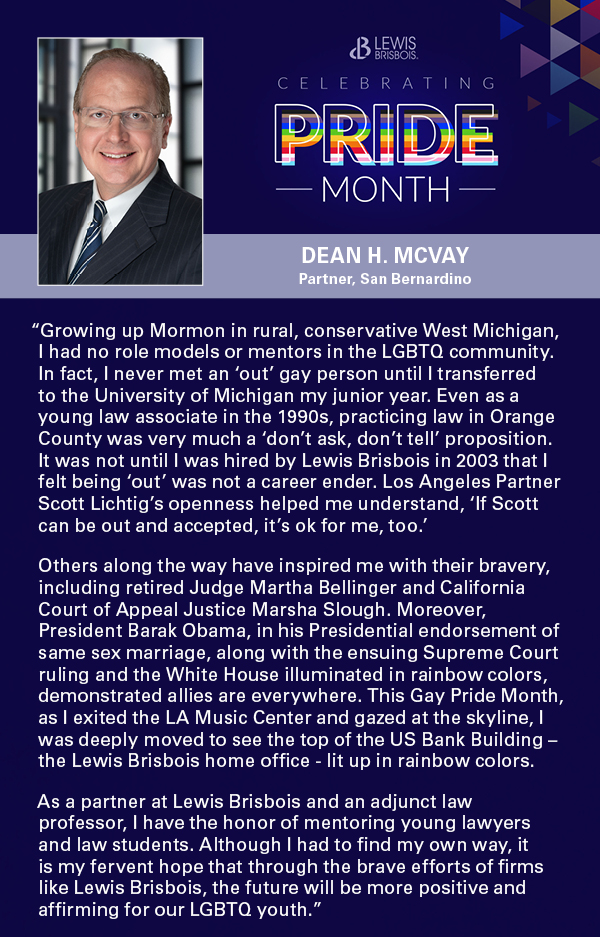 The next contribution in our Pride Month spotlight series comes from Orange County Associate Hussain Turk, who describes the complex feelings he experiences as an HIV+ gay Muslim. Hussain also acknowledges the committed allies, community leaders, and mentors who have reminded him that “true Pride comes from humility and sacrifice.” 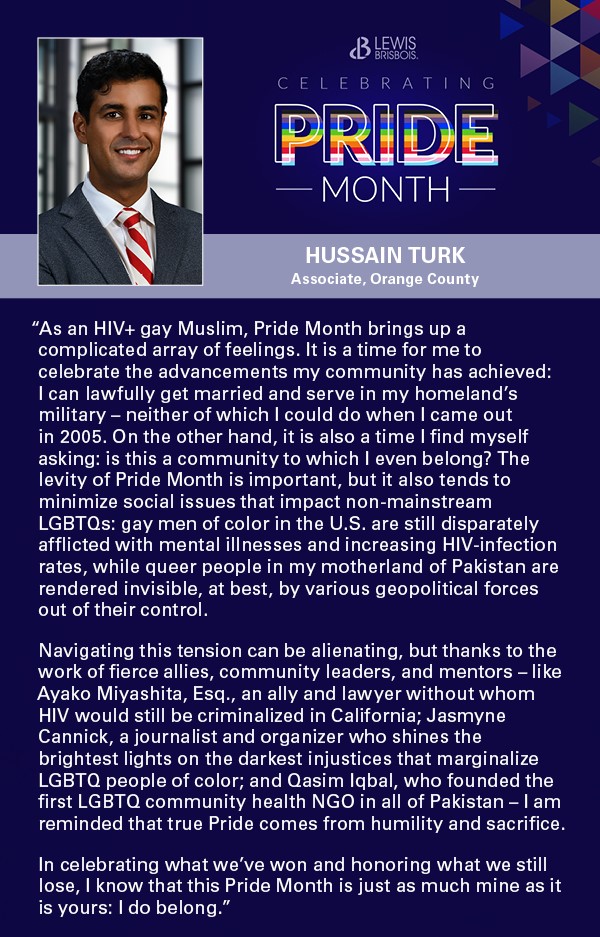 As our Pride Month spotlight series continues, we hear from New York Associate Nicholas Graves, who notes that “growing up gay takes serious heavy lifting,” particularly without role models or mentors. He also emphasizes that although the LGBTQ community has achieved important milestones, “constant vigilance” is required to protect these rights.

Nicholas is a member of Lewis Brisbois’ General Liability Practice. He handles an array of matters in state and federal courts in New York and New Jersey, including trials and appeals. Learn more about Nicholas’ professional background here. 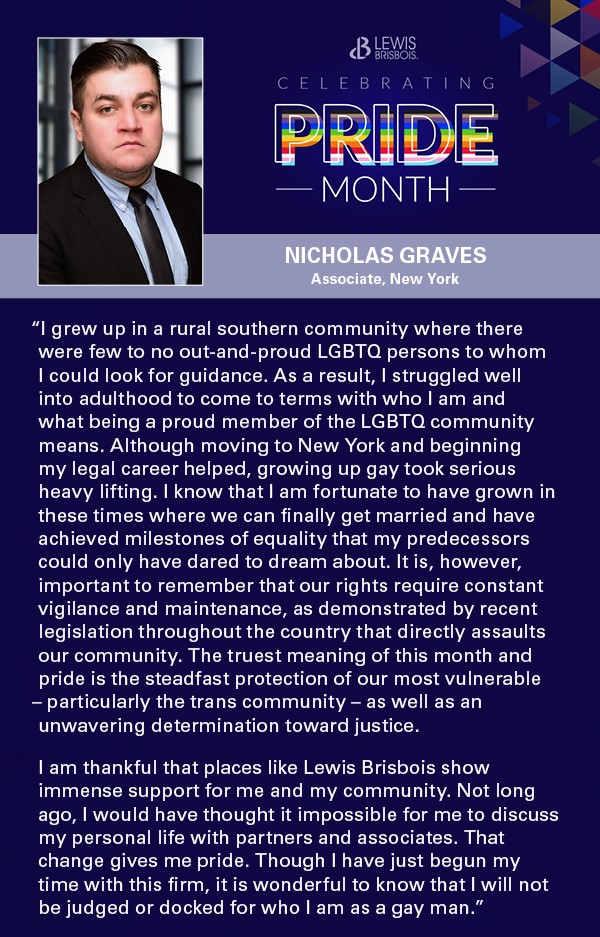