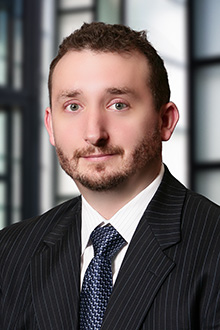 Jeremy Schrag is a partner in the Wichita, Kansas and Kansas City, Missouri offices of Lewis Brisbois. He is an experienced investigator whom clients regularly call upon to provide early analysis of and strategy for their most pressing situations, so that their business interests are protected well before the litigation process begins. Should a case be filed, Mr. Schrag aggressively defends his clients, and has led his clients to success in state and federal courts across the Plains.

Mr. Schrag’s talents as an investigator and litigator are called upon most often in employment, transportation, and general liability cases. In the employment sphere, Mr. Schrag regularly handles matters concerning alleged civil rights violations such as sexual harassment. He also advises employers and local governments regarding their employment policies and practices. A significant portion of Mr. Schrag’s employment practice is devoted to higher education law and constitutional tort litigation, including representing public and private universities in Title IX investigations and training.

A frequent speaker and author, Mr. Schrag regularly presents on employment law topics to attorneys and human resource professionals. He has served as an author on the Kansas Bar Association’s Civil Rights Annual Survey of Law since 2014, and spearheaded the preparation of a case law update of all notable employment and civil rights cases filed in the Tenth Circuit and District of Kansas.

United States District Court for the District of Kansas

U.S. District Court for the Western District of Missouri

United States District Court for the Eastern District of Missouri

United States District Court for the Western District of Oklahoma

U.S. District Court for the Northern District of Oklahoma