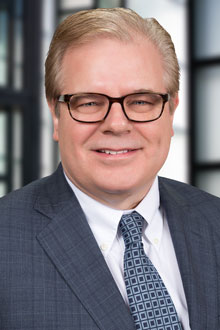 Robert Freeman is a partner in the Las Vegas office of Lewis Brisbois, National Vice-chair of the Bad Faith Litigation Practice, and a member of the Insurance Law Practice. Mr. Freeman has expertise in the areas of insurance coverage and bad faith, defense of municipalities and officials against claims for civil rights violations, discrimination in employment, violation of federal and state employment statues, and defense for injury claims as a result of negligent or intentional conduct.

Mr. Freeman has also defended against premises liability claims brought against owners, operators and managers of companies and commercial properties. Representing apartment complexes, commercial businesses, grocery stores, and hotels has allowed Mr. Freeman to handle a wide range of premises matters including those involving defects on premises, slip and falls, negligent or improper maintenance of the premises, negligent or inadequate security, and elevator, escalator and moving sidewalk injuries.

During his career, Mr. Freeman has developed relationships with insurance companies, police officers, city officials, risk managers, in house counsel, and experts and has been involved in the drafting and vetting of written policies and procedures covering a wide variety of subjects from employment discrimination and harassment to police high speed pursuit, dealing with the mentally ill, and everything in between. Mr. Freeman has significant experience litigating the issues common to claims made against municipalities, premises owners, public employers, private employers, insured drivers, and insurance companies, and has litigated before juries, judges, administrative agencies, arbitrators, and mediators. In addition, Mr. Freeman is licensed to appear before the United States Supreme Court and the Ninth Circuit Court of Appeals. He has appeared before the Ninth Circuit and the Nevada Supreme Court to argue issues related to federal and state law and the representation of municipalities and city officials.

Bachelor of Arts in Political Philosophy, 1982