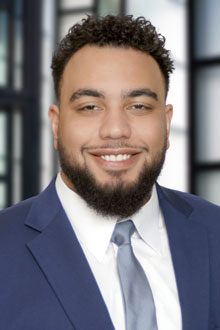 Cameron Mobley is an associate in the Atlanta office of Lewis Brisbois and a member of the General Liability Practice. Cameron's practice primarily consists of premises liability and product liability defense. However, Cameron also has significant experience defending medical malpractice claims for physician groups, hospitals, hospital systems, hospital authorities, long-term care facilities, and outpatient psychological and behavioral health care facilities. Additionally, Cameron has litigated numerous commercial auto cases. With regard to premises liability, Cameron has defended international hotel chains and national property management companies alike from claims of all types ranging from static defects to negligent security. In addition, he defends product liability cases for a range of manufactures, sellers, and distributors across several industries. Through his experience in this range of practice areas, Cameron has litigated several high exposure cases including wrongful death and permanent injury cases in both state and federal court.

While in law school at Georgia State University, Cameron was the president of the Student Trial Lawyers Association (Mock Trial) and an active member of the Moot Court program. He competed in numerous national competitions across the country through his association with these organizations. Due to his success in both Mock Trial and Moot Court, Cameron was inducted into National Order of Barristers. In fact, Cameron was one of a select few to be the first National Order of Barristers inductees ever from Georgia State University. In his last year of law school, Cameron also served as a Litigation Teaching Associate who helped teach trial practice to second-year students. Cameron also served as an honor court prosecutor throughout law school while simultaneously working in a graduate assistantship position as well as a clerking for a private law firm.

Bachelor of Science in Business Administration, 2014