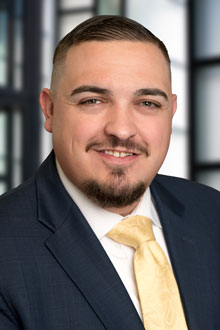 Eric T. Burkhardt is an associate in the Philadelphia office of Lewis Brisbois and a member of the General Liability Practice. Eric graduated with distinction and earned a Bachelor of Science in Finance from the Pennsylvania State University Smeal College of Business in 2014. Eric earned his Juris Doctor from Villanova University Charles Widger School of Law in 2017.

Prior to joining Lewis Brisbois, Eric worked as an Assistant Defender at the Defender Association of Philadelphia. During his time as a public defender, Eric handled hundreds of cases from the initial arrest through preliminary hearing, pre-trial motions, trials, sentencings, and violation of probation hearings.

Bachelor of Science in Finance, with distinction, 2014