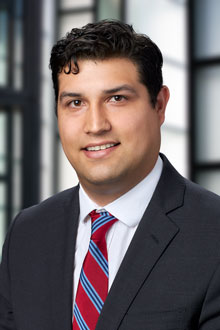 William Geoffrey Anderson is an associate in the San Francisco office of Lewis Brisbois and a member of the Labor & Employment Practice. Mr. Anderson’s practice has a primary emphasis on wage and hour class-action and representative-action litigation.

Mr. Anderson is particularly well-versed in the intricacies of the California Private Attorneys General Act. He uses this expertise in defending companies in high-exposure, high-profile cases.

Prior to joining Lewis Brisbois, Mr. Anderson had experience prosecuting wage and hour class and representative actions for a prominent plaintiff-side law firm in San Diego.

Mr. Anderson is a native Spanish speaker and enjoys the opportunity to defend clients with Latin-American roots, as well as applying his Spanish legal and advocacy skills as often as possible.

Outside of the office, Mr. Anderson enjoys playing basketball and golf, as well as spending time with his wife and son. Mr. Anderson is an avid 49ers, Giants, and University of Missouri fan.