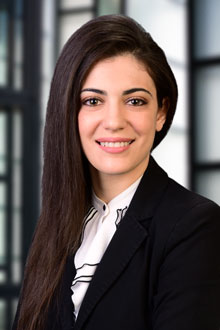 Ariadne Panagopoulou is an associate in the New York office of Lewis Brisbois and a member of the Labor & Employment Practice.

Ariadne is a dual-qualified lawyer in the jurisdictions of New York and England & Wales (Solicitor, Law Society of England and Wales). She has significant experience representing business owners in a vast array of employment disputes including wage and hour, discrimination/sexual harassment, family and medical leave, E.R.I.S.A., restrictive covenants, and whistleblower actions from the commencement of litigation up until trial and/or settlement.

Ariadne's practice also encompasses general commercial litigation. Ariadne has successfully litigated various breach of contract claims, trademark disputes, claims for lack of accessibility under Title III of the ADA, and has recently obtained a favorable verdict on behalf of a landlord in a commercial property dispute following a bench trial.

Prior to joining Lewis Brisbois, Ariadne was the lead employment attorney at a boutique NYC midtown firm. Prior work experience also includes having served as a research assistant in microeconomics at Harvard Law School and teaching Law School courses at the University of Edinburgh for which she received a teaching award.

US District Court for the Southern District of New York

US District Court for the Eastern District of New York

US District Court for the Northern District of New York