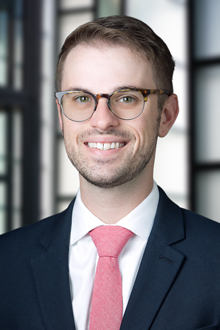 Carson P. Baucher is an associate in the San Diego office of Lewis Brisbois and a member of the Complex Business & Commercial Litigation and Government Investigations Practices. He represents corporations and individuals in a wide range of matters in federal and state court, specializing in white collar defense and complex commercial litigation. Carson is an aggressive litigator with a track record for achieving success for his clients. He has considerable courtroom experience, having taken many cases all the way through jury trial and on appeal. Carson has written and argued numerous dispositive motions in federal district court and has personally argued before the Ninth Circuit Court of Appeals.

While he was a trial attorney with the Federal Defenders of San Diego, Carson helped expand the office’s renowned training curriculum and supervised new trial attorneys. He has served as an instructor in the areas of defensive litigation and courtroom trial skills.

Carson also has a long track record of community involvement. In addition to his years of representing indigent defendants in federal and state court, he volunteers with high school mock trial programs and local pro bono organizations.

In his free time, Carson enjoys cooking and international backpacking.

University of California at Berkeley

Bachelor of Arts, with high honors, 2009