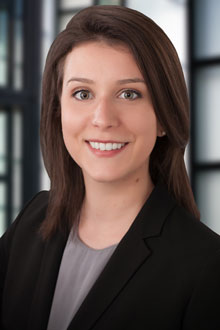 Amandine Smith is a partner in the Houston office of Lewis Brisbois and a member of the General Liability Practice. Amandine was born and raised in Europe before moving to Texas as a teen. Amandine studied International Relations at Florida International University and received a Bachelor of Arts degree, a minor in Geography, and a Certificate in Middle Eastern Studies. After graduating early, Amandine went straight to law school where she began her legal career as an intern for the Harris County District Attorney’s Office and County Attorney’s Office. After law school, Amandine worked on the Plaintiff side focusing on personal injury actions then at a boutique medical malpractice firm defending physicians, nurses, and hospitals. Experience on both sides of the docket allows Amandine to bring a unique perspective to her cases.

At Lewis Brisbois, Amandine specializes in the defense of healthcare entities throughout the state of Texas, as well as, a transportation matters including TNC litigation. Amandine also practices in the areas of premises liability, products liability, and construction in state and federal courts. Amandine has successfully advocated for her clients, taking the lead at both bench and jury trials, as well as with appellate work including successful oral argument in front of the Ninth Court of Appeals in Beaumont, Texas representing a physician in a healthcare liability claim.