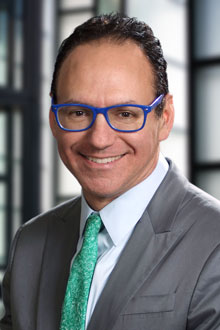 Jeffrey is a trial lawyer focusing on trademark, patent, false advertising, trade secrets, and copyright litigation, as well as technology law, business, real estate and commercial disputes. Jeffrey’s practice also focuses on contract issues, licensing, Internet domain name disputes and related areas of law. He has handled preliminary injunctions and temporary restraining orders, jury and non-jury trials in federal and state courts, and disputes before the U.S. Patent & Trademark Office. Jeffrey has secured multiple intellectual property victories in federal court, including winning a significant trademark jury trial in 2009, winning a complex copyright infringement jury trial in 2015, and obtaining dismissal of two high-profile trademark lawsuits in 2012 and 2013. Also in 2013, his efforts led to a favorable settlement in a high-profile patent case for less than one percent of the amount sought by the plaintiff. In 2014, he obtained a favorable settlement in a significant copyright infringement case. In 2016, Jeffrey obtained summary judgment of non-infringement in a patent case involving computer equipment. Jeffrey also provides expert witness opinions in trademark and unfair competition cases. In 2017, Jeffrey achieved a settlement of $90,000 for a defendant in a $28,000,000 advertising dispute. Jeffrey secured multiple favorable results in trademark cases in 2020, 2021, and 2022. Early in his career, Jeffrey also obtained a defense verdict in a multi-million-dollar jury trial involving architectural salvage pieces from historical St. Louis landmarks.

He advises companies on various business planning issues, and he is general counsel to numerous startup and emerging companies across the country. Small Business Monthly named Jeffrey one of the Top 10 lawyers for entrepreneurs.

He has significant experience in the vehicle service contract, organic and natural products, advertising, apparel, luggage and consumer electronics areas.

In addition, Jeffrey is the author of numerous articles and he has given many presentations to businesses and lawyers on a wide range of intellectual property and business related topics. Jeffrey also is an adjunct law professor teaching intellectual property litigation, and he is active in Startup Colorado and was a sponsor and judge for the City of Denver’s Business Plan Competition, among many other commitments to professional and community service. Jeffrey is also an award-winning writer on racism and diversity.