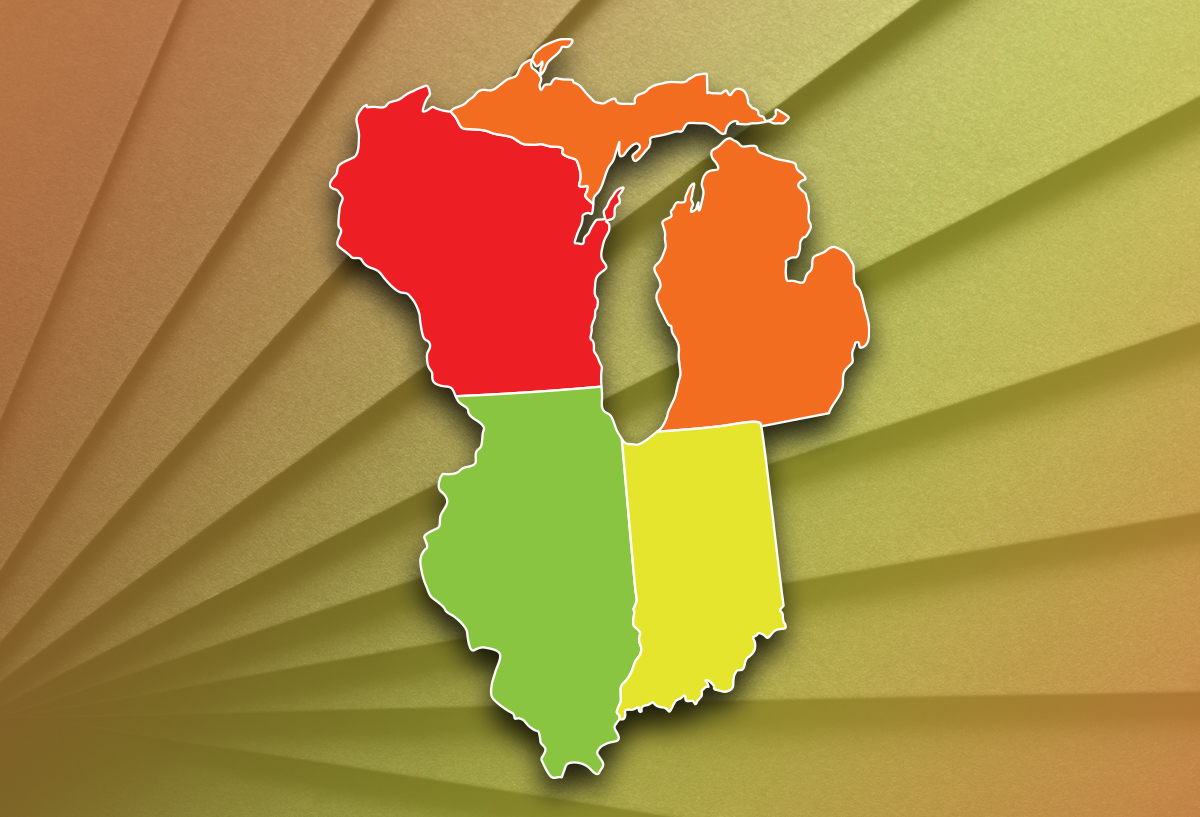 (December 26, 2019) - A review of the most important labor and employment law updates of the past year from Illinois, Indiana, Michigan, and Wisconsin.

On August 9, 2019, Governor J.B. Pritzker signed the Workplace Transparency Act (WTA), an expansive piece of legislation that will impact almost every employer in Illinois starting on January 1, 2020. Employers may need to revise their standard settlement, severance, employment, and arbitration agreements to comply with significant new requirements, including:

Agreement provisions found to have violated any part of the WTA will be considered void and severed from the agreement, but other agreement terms will remain in effect. An employee who is successful in challenging the enforceability of a contract, but not an employment policy, under the WTA may recover attorneys’ fees and costs incurred.

In conjunction with passing the WTA, the Illinois legislature also made noteworthy revisions to the Illinois Human Rights Act (IHRA). These amendments expand the coverage of the IHRA, impose disclosure requirements, and mandate annual sexual harassment prevention training. Important changes include:

Illinois became the 11th state to legalize recreational cannabis and the first state in which a legislature has approved commercial sales. Effective January 1, 2020, residents 21 and older may legally purchase marijuana and possess approximately one ounce of flower, five grams of cannabis concentrate, or 500 milligrams of THC in a cannabis-infused product, like gummies. Municipalities may forbid commercial retail within their borders, but may not prevent individual possession.

The good news is that employers may continue with their reasonable zero-tolerance or drug-free workplace policies as it relates to employees being under the influence of or using cannabis in the workplace, while performing one’s job duties or while on call. The Cannabis Act does not create a cause of action against employers who test employees or applicants for drugs, either pre-employment or randomly, pursuant to its policy. In response to positive results, such employers can withhold or withdraw an applicant’s offer, as well as discipline or terminate an employee. Employers with such policies in place should review them and train supervisors and managers on the proper and reasonable way in which the policy is enforced going forward.

Two cautionary notes: 1) in the absence of a reasonable workplace drug policy, the Illinois Right to Privacy Workplace Act, which was amended by the Cannabis Act to include cannabis as a “lawful product,” protects the use of cannabis outside of work; and 2) employers must still make accommodations for the use of marijuana pursuant to the previously enacted Compassionate Use of Medical Cannabis Pilot Program Act, which allows patients diagnosed with specified medical conditions to possess and use medical marijuana.

Effective September 29, 2019, the Illinois Equal Pay Act (IEPA), which prohibits pay disparity between employees of the “opposite sex” and as to African-American employees, was amended as follows.

2. Pay Transparency: Employers cannot require employees to sign a contract or waiver prohibiting them from disclosing or discussing information about their compensation or benefits. There is an exception for HR personnel, supervisors, and others who learn this type of information during the scope of their employment and should maintain confidentiality.

Effective January 1, 2020, Illinois’ Victims’ Economic Security and Safety Act (VESSA) is amended to include victims of “gender violence.” Gender violence includes acts and threats of violence based on an individual’s actual or perceived sex or gender. Covered employees will receive the same leave entitlements as victims of domestic or sexual violence under VESSA. Leave entitlements vary depending on the size of the employer.

On July 24, 2019, Chicago’s City Council enacted the Chicago Fair Workweek Ordinance, which is scheduled to become effective on July 1, 2020. In passing the Ordinance, the City Council stated it sought to enact fair and equitable employment practices in Chicago and provide working people with protections that ensure employer scheduling practices do not unreasonably prevent workers from attending to their families, health, education, and other obligations.

The Ordinance requires, among other things: (1) that employers give employees 10 days’ advance notice of their work schedule, which will increase to 14 days’ notice two years after the effective date; (2) that if an employer changes an employee’s schedule less than two weeks before the shift, the employee is entitled to either decline the change in schedule or receive an extra hour of pay at the normal rate of pay, referred to as “predictability pay”; and (3) that employers first offer additional available hours to existing employees instead of temporary or seasonal workers.

The Ordinance only applies to certain employers based upon number of employees and the industry in which the employer operates. Namely, with certain exceptions, the Ordinance applies to employers that employ more than 100 employees in specific industries, including building services, healthcare, hotels, manufacturing, restaurants, retail, and warehouse services. The protections of the Ordinance may be waived if the waiver is set forth in a collective bargaining agreement in clear and unambiguous terms.

There could be developments with the Ordinance before the July 1, 2020 effective date. A group representing building owners and managers recently filed a lawsuit in federal court in Chicago, primarily challenging the Ordinance on two grounds: 1) the provision requiring employers and unions to waive the fair workweek protections in any new collective bargaining agreement violates the National Labor Relations Act by giving unions an extra bargaining chip; and 2) the Ordinance violates federal and state equal protection laws because it does not apply a broad swath of industries, including construction, banking, finance, telecommunications, professional services, government, education, insurance, printing, and publishing. This action is pending in the United States District Court for the Northern District of Illinois: Building Owners and Managers Association of Chicago v. The City of Chicago, Civil Case No. 19-CV-7212.

On January 23, 2019, the United States Court of Appeals for the Seventh Circuit held that “the plain language of § 4(a)(2) [of the Age Discrimination in Employment Act (ADEA)] makes clear that Congress, while protecting employees from disparate impact age discrimination, did not extend that same protection to outside job applicants.” The provision at issue “proscribes certain conduct by employers and limits its protection to employees.” Applying ordinary principles of grammatical construction, the court rejected the plaintiff’s argument that the language “any individual” suffices to extend the protections of § 4(a)(2) beyond current employees: “[t]he clear takeaway is that a covered individual must be an employee.” Accordingly, only employees, not job applicants, can bring disparate impact claims under the ADEA.

This affects federal courts in all states in the Seventh Circuit, including Illinois, Wisconsin, and Indiana.

Effective July 1, 2019, certain employers became exempt from Indiana’s minimum wage, overtime, and unemployment insurance laws. Specifically, employers who are considered “direct sellers” are exempt from these laws. Direct sellers are individuals who: (1) are in the business of selling to buyers in any place other than in a permanent retail establishment; (2) receive the majority of their payments directly related to sales or other outputs as opposed to the number of hours worked; and (3) perform services under a written contract stating that they will not be treated as employees for tax purposes.

Indiana amended its workplace safety law to add penalties for willful violations of the Indiana Occupational Safety and Health Act (IOSHA). If an employer is found to have willfully violated IOSHA, and that violation contributed to an employee’s death, the employer will receive a civil penalty in an amount between $9,472 and $132,598 for each violation.

In January 2019, Governor Gretchen Whitmer signed 10 executive directives, implementing new requirements in the employment field. Executive Directive 2019-09 provides that any recipients of government loans and/or contracts may “not discriminate against an employee or an applicant for employment in hiring, any terms and conditions of employment, or matters related to employment because of religion, race, color, national origin, age, sex, height, weight, marital status, partisan considerations, or a disability or genetic information that is unrelated to the person’s ability to perform the duties of a particular job or position.” Significantly, “sex” now includes “sexual orientation and gender identity or expression,” thereby extending protection for LGBT employees.

Notably, executive directives such as this do not apply to private businesses. They only apply to the executive branch state agencies and employees, as well as certain contractors and grant and loan recipients. Of further note, not-for-profits that are 501(c)(3) religious organizations are no longer exempted from compliance under this directive.

Governor Whitmer also enacted Executive Directive 2019-10, which prohibits executive branch agencies from inquiring about an applicant’s compensation history until an offer of employment has been extended. The governor observed that the policy behind this directive is an interest in eradicating an already existing gender wage gap that would persist if employers were allowed to offer women lower salaries than they otherwise would.

On March 20, 2019, the Supreme Court of Wisconsin held that employers are ordinarily not required to compensate employees for time spent driving to or from a job site. In Kleninger v. Crown Equipment, the defendant employer offered its technicians the option of either driving to the office in their personal vehicle and then taking a company vehicle to a job site or taking a company vehicle directly from the employee’s home to a job site. Employees who took the first option would begin being paid once they left the main office en route for the job site; employees who took the second option would begin being paid once they actually arrived at the job site.

The plaintiffs in Kleninger chose the second option and traveled in a company van from their home directly to a job site. They asserted that the employer was required to pay them for time spent commuting in a company van from their home to the job site, as it was part of their “workday” as defined by Wisconsin law. The Supreme Court of Wisconsin rejected the plaintiffs’ argument, holding that simply commuting to a jobsite transporting company tools, without more, in a company van was not an integral part of a principal activity of the job, and therefore was not compensable as part of the employee’s workday under Wisconsin law. Notably, the court declined to look to federal case law for guidance, and relied exclusively on Wisconsin state law. As a result, employers are not required to compensate employees for time spent simply commuting in company vehicles.