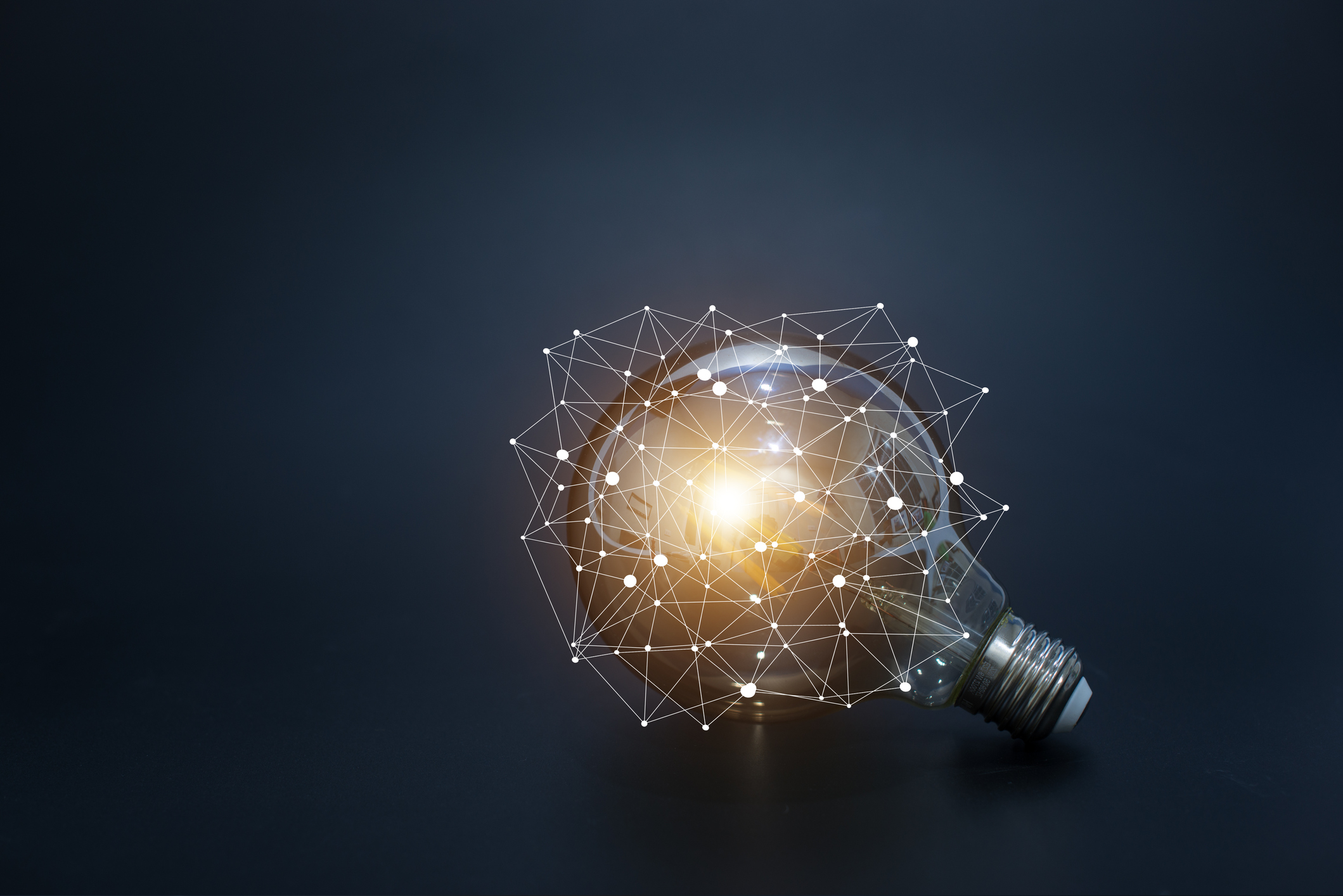 This two-part blog series provides a primer on design patents and is based on a presentation delivered at the AIPLA Design Rights Boot Camp in August 2019. Part I will cover the basics of design patents and compare them to other IP protections, such as trademark and copyright. Part II will review the application process for design patents, and touch on the prosecution of such applications.

Design patents are often narrow in scope, but are nevertheless well-suited to protect the ornamental appearance of products that are apt to be copied. For example, unscrupulous vendors often use foreign manufacturers to copy the visual appearance of luggage, purses, footwear, and other consumer products that are sold in the U.S. or online at significant discounts. This practice reduces the value of legitimate products and often tarnishes the reputation of the rightful manufacturer. The patent holder can use a design patent to force infringers to pay a royalty, disgorge their profits, stop selling the infringing products, or prevent infringing products from entering the U.S. As an example, Apple won a $533 million dollar jury verdict in 2018 for infringement of design patents on iPhone and iPad designs.

What is a Design Patent? 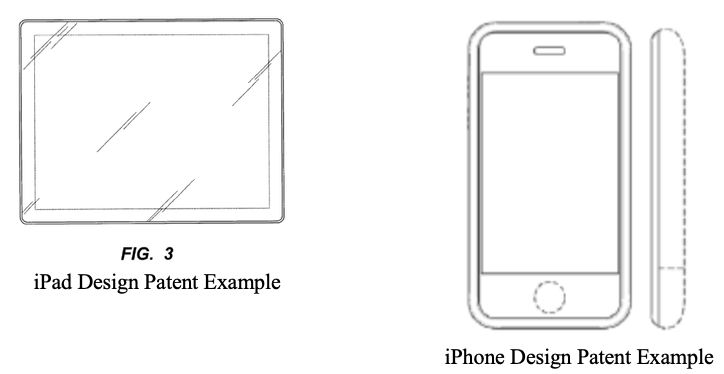 Design patents protect the ornamental or non-utilitarian features of an “Article of Manufacture.” That is, a design patent protects the visual appearance of a product, while a utility patent generally protects a product’s structure, the way it functions, or how it is made. A design must be “ornamental” to be patentable, meaning the design “must appeal to the eye as a thing of beauty.”

Protection is also available for surface indicia (e.g., markings applied to the article of manufacture) and Graphic User Interfaces (GUIs), such as static and dynamic (e.g., animated) computer-generated icons.

The subject matter of a design patent application cannot be “functional,” meaning that a design dictated by its function is not a proper subject for design patent application. The courts have listed a number of factors for assessing whether the overall appearance of a design as a whole is dictated by function – “whether the protected design represents the best design; whether alternative designs would adversely affect the utility of the specified article; whether there are any concomitant utility patents; whether the advertising touts particular features of the design as having specific utility; and whether there are any elements in the design or an overall appearance clearly not dictated by function.”

Design Patent Protection vs. Other Forms of IP Protection

Design patents can be used as a primary tool to protect one’s intellectual property or can be used to supplement other protections.

As a result of the decision in Egyptian Goddess, Inc. v. Swisa, Inc., 543 F.3d 665 (Fed. Cir. 2008) (en banc), manufacturers now find it more difficult to “design around” a design patent by changing trival aspects of the claimed design. That is, to evade a design patent, the differences between the product and the claimed design must be more than insignificant Copiers often fail to consider the existence of U.S. design patents because of their relative unpopularity compared to utility patents, or because design patent applications are not published and remain secret until they are issued (usually 18 months after their effective filing date). On this latter point, a design patent application can be pending while infringers are marketing and selling products only for them to be forced to cease their activity upon issuance of the design patent.

Finally, prosecution costs are often far less in design patent applications than they are in the utility patent applications because rejections/objections encountered during USPTO proceedings are usually easier to address. Novelty or obviousness rejections are rare, especially compared to typical utility patent prosecution, but rejections of these types are on the rise. Only about 26% of the 1,000 most recently issued design patents received an initial rejection during prosecution, and only about 4% of design applications received a final office action, per Professor Crouch of the Patently-O blog.

If the design patent application figures show multiple versions, i.e. “embodiments” of a design, a practitioner may also be faced with a restriction requirement where the examiner will require that one design must be prosecuted. One pitfall to be aware of, however, is double patenting. The U.S. Code allows for an inventor to obtain a single patent for an invention (35 U.S.C. § 101; 35 U.S.C. § 121), and courts have stripped an inventor of all their patent rights, both utility and design, for violating this section. For example, in Phizer, Inc. v. Teva Pharms. USA, Inc., 518 F.3d 1353, 1363 (Fed. Cir. 2008), a patentee was stripped of their rights under double patenting because the patent in question did not issue from a divisional application and claims were not patentably distinct from another invention.

Trademarks are used by consumers to identify the source or origin of goods and services associated with the trademark. An important aspect of trademark law is the goal of protecting consumers from the likelihood of confusion, so they are not misled. Trademarks are traditionally thought of as logos, names, designs, or other indicia that convey the origin of a good or service. Product configurations may also be protected under trademark, i.e. “trade dress,” if they include identifying features such as product design or packaging, which may acquire a distinctiveness that serves to identify the manufacturer or source of a good.  To obtain trade dress protection for product configurations, one needs to show that the design of the product at issue is inherently distinctive or has acquired secondary meaning. To prove infringement of a trademark, one must prove that there is a likelihood of confusion between the protected and accused marks.

“A product can be both patentable and protected by trademark rights as long as the particular design protected does not have a utilitarian function.” See Topps Co. v. Gerrit J. Verburg Co., 41 U.S.P.Q.2D 1412 (S.D.N.Y. Dec. 13, 1996). An example of a trademark is Coca-Cola®, while an example of trade dress would be the shape of the Coca-Cola® bottle. The shape of a Coca-Cola® bottle could have also been protected under a design patent. Although a design patent only lasts 14 or 15 years from the date of issuance, a federal trade dress registration may last indefinitely if the owner of the mark is using it in interstate commerce and identifies the source of the goods or services. Ideally, a product which is the subject of a design patent may also acquire distinctiveness in the marketplace, thereby acquiring trade dress protection of the unique shape. It is important to note, however, that trade dress cannot be functional, and that the existence of a utility patent that claims the features sought to be protected by trade dress is strong evidence that such features are functional. The existence of a design patent covering a product has been found to at least presumptively indicate non-functionality of the claimed design.

Thus, a way to supplement trademark protection for a product is to file a design patent application that covers the product. Note that, unlike trademarks, patents must be applied for within one year of when a product embodying the invention or design was first sold or offered for sale. After the design patent is issued, the design patent holder would enjoy a 15-year monopoly excluding others from selling a product that embodied the claimed design. During the life of the design patent (or thereafter), if the design is popular enough to acquire distinctiveness, trade dress protection may be possible. See e.g. Wal-Mart Stores v. Samara Bros., 529 U.S. 205, 216 (2000) (stating that in an infringement action for an unregistered trade dress, a product’s design is only protectable upon a showing of secondary meaning). As it typically takes years for a design to acquire distinctiveness, having a design patent would protect the product long enough until acquired distinctiveness is obtained. For example, Apple, Inc. first obtained a design patent for their iPod® media device and then obtained a trademark registration for the same device.

Copyright protection is the grant of a set of exclusive rights to the author of a creative work. See 35 U.S.C. § 106 (2009). Copyright law protects a creative expression of an idea, but not the idea itself. For example, a drawing can be copyrighted, but the idea for a drawing cannot. Depending on when a copyright registered, it has a term of 70 years after the death of the author. Copyrights are familiar to most and are particularly well suited to literary, musical, and visual works. Copyrights may also protect other works such as architectural plans, building designs, and the like.

Creative works integrated into functional devices (e.g. a sculpture integrated into a lamp) have properly been the subject of both copyright and design patent protection. See Mazer v. Stein, 347 U.S. 201, 217 (1954) (stating that “Neither the Copyright Statute nor any other says that because a thing is patentable it may not be copyrighted.”). More recently, the U.S. Supreme Court in Star Athletica LLC v. Varsity Brands, Inc., 137 S. Ct. 1002 (2017) confirmed the copyrightability of the artistic aspects of a cheerleading uniform because the copyrighted design was conceptually separable from the utilitarian features of the uniform. If the sole intrinsic function of an article is utility, however, the fact that it contains creative elements will not qualify it for copyright registration. As an alternative to actual damages (e.g., the loss caused or profit made because of the infringement), copyright holders may recover statutory damages of up to $30,000 for non willful infringement and up to $150,000 for willful infringement, which is a type of damage that is not available for design patent infringement. However, for infringement that began after the copyright registration date, copyright owners can only recover statutory damages if the effective date of registration is not later than three months after the first publication (see 35 U.S.C. § 412 (2009)). A copyright registration has the added benefit of being far less expensive and having a streamlined prosecution path when compared to design patents.

A copyright holder may consider seeking protection for the ornamental shape of a product that incorporates copyrighted or copyrightable subject matter. For example, the ornamental shape of a snowboard may also include artistic works (e.g., illustrations, graphics) such that the creator may seek dual protection. Similarly, a manufacturer who sells a uniquely designed product should consider seeking copyright protection in addition to design patent protection if the product will include artistic elements such as drawings.

In Part II, we will review the design application process and provide a brief discussion of the prosecution of such applications.