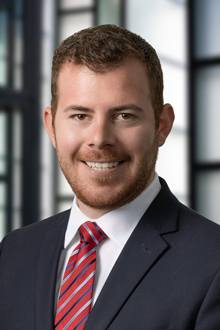 Andrew Tremonti is an associate in the Kansas City office of Lewis Brisbois and is a member of the General Liability and Labor & Employment Practices. His practices focus on the areas of insurance litigation, employment disputes, and general liability.

Previously, Andrew was an in-house legal intern for New Directions Behavioral Health, the summer before graduating law school. During his time with New Directions, Andrew completed various projects regarding state and federal regulatory and compliance matters for health care service providers. During Andrew’s final semester of law school, he returned to New Directions to assist with the overseeing and compliance of HIPPA privacy incident reporting and completed a fifty-state survey pertaining to medical consent laws for minors focusing on tele-health.

Andrew received his Juris Doctor from the University of Missouri-Kansas City School of Law in 2019, with an emphasis in Intellectual Property. During law school, Andrew committed a significant portion of time to public service, having completed over 200 hours of pro bono work. During his final year, he served as a judicial intern for the United States District Court for the Western District of Missouri. He was also an extern for UMKC School of Law’s Entrepreneurial and Intellectual Property Clinic, serving new and established entrepreneurs of Missouri and Kansas in need of assistance with legal services without the means to afford market rates for those services. As an extern at the Clinic, Andrew delivered legal and intellectual property services under the supervision of faculty for services including: assisting in making a choice of entity; entity creation by drafting articles of incorporation and organization, by-laws, and partnership agreements; contract review and drafting; copyright and trademark creation and protection; and advice concerning compliance with consumer, licensing, and regulatory rules.

Andrew also gained an understanding of international law having participated in a summer study program in Beijing, China, hosted by Renmin University of China Law School, generally recognized as China’s premier law school. There he obtained an overview of the Chinese legal system focusing on the evolution of Chinese domestic law within the country’s socialist market economy. He also participated in a course on International Criminal Tribunals located in The Hague, Netherlands. While there, Andrew gained insight into the complex legal workings of The International Court of Justice (ICJ), International Criminal Court (ICC), The International Criminal Tribunal for the Former Yugoslavia (ICTY) (since dissolved), the Permanent Court of Arbitration (PCA), Iran-US Claims Tribunal (IUSCT), Special Tribunal on Lebanon (STL), and the Organization for the Prohibition of Chemical Weapons (OPCW).

United States District Court for the Western District of Missouri

United States District Court for the Eastern District of Missouri

Bachelor of Arts in Human Biology, 2015