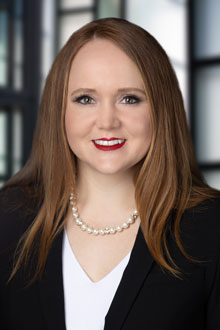 Suzanne Schmidt is an associate in the San Diego office of Lewis Brisbois and a member of the Appellate Practice.

While attending law school at California Western School of Law (CWSL), Ms. Schmidt served as a judicial extern for the Honorable Cynthia A. Bashant of United States District Court for the Southern District of California and served as an intern for the San Diego County District Attorney’s Office. Ms. Schmidt also interned for the San Diego Superior Court and abroad, in The Hague, Netherlands, at the United Nations International Criminal Tribunal for the Former Yugoslavia.

Additionally, while in law school, Ms. Schmidt was a Tort’s tutor, Executive Editor of the CWSL International Law Journal, served as a member on Law Review, and graduated second in her class with honors.