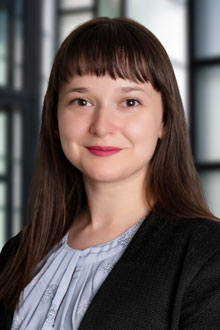 Julia Purdy is an associate in the Albuquerque office of Lewis Brisbois and a member of the General Liability, Insurance Law, and Hospitality Practices. Julia concentrates her practice on civil litigation, including personal injury, real estate, and water law matters. Julia has experience working with developers, restaurateurs, and hoteliers to ensure compliance with federal and state laws to improve the experiences of customers and strategize for long-term business viability. She also has experience representing restaurants and hotels in the civil litigation realm. Prior to moving to New Mexico, Julia worked in private practice in New York where she also worked in the civil realm. Julia has a longstanding interest in environmental law, and water law specifically. Originally from the Great Lakes region, her appreciation for water resources began at a young age. Julia has published three articles in the water law field, one of which won an award. She has represented and advised municipal authorities and developers concerning remediation of potentially harmful substances in bodies of water, as well as on compliance and regulatory matters. She understands the importance of reliable access to clean water from community and industry perspectives.

During law school she completed an externship at the Western District of New York. She interned at the United Nations Water Decade Program on Advocacy & Communication in Zaragoza, Spain. Her international practice also extends to having completed internships at law firms in Stockholm, Sweden, and Paris, France, where she participated in the mergers and acquisitions, and international commercial arbitration groups, respectively. Julia speaks Spanish and French.

When not practicing law, Julia enjoys puzzles, scuba diving, and spending time with her family.