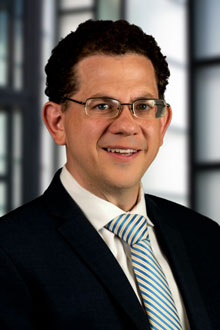 Ciro Poppiti is a partner in the Wilmington office of Lewis Brisbois and a member of the Complex Business & Commercial Litigation Practice.

A proactive and highly-experienced advocate, Ciro Poppiti forges long-term relationships with clients who rely on him to favorably resolve complex issues where government regulation intersects with real-world business decisions. He is at his best when faced with the toughest of scenarios, navigating clients to solutions which save their businesses and their livelihoods.

Ciro is a veteran litigator, who seeks swift and effective resolution of virtually any type of complex commercial, corporate, or real estate matter arising in Delaware, as well as disputes and lawsuits involving the operation and interpretation of partnership agreements and limited liability operating agreements. He has been regularly appointed by the Court of Chancery as a master pro hac vice, ruling from the bench on over 150 matters. His well-regarded decision in The Estate of Leonard Rich (2013) established a three-factor paradigm in determining the appropriateness of deductions in an estate accounting. He received the 2015 Delaware Bar Association's Government Service Award.

In addition, Ciro has an outstanding reputation in the area of alcohol law. Ciro is one of a handful of practicing attorneys in the nation who has been an owner at all “three tiers” of the alcohol business—importer, wholesaler, and retailer.  This gives Ciro unusual insight into the day-to-day workings of the industry as well as an international rolodex of contacts. Ciro is the founding chair of the Delaware State Bar Association Section on Tourism & Hospitality Law. His advice and counsel is sought after by the biggest names in the industry; he has lectured widely and teaches an annual course on alcohol law at Wilmington University.

Ciro has expanded his practice to sports and entertainment. Ciro has been instrumental in recent changes in the state-by-state laws governing combat sports. He previously produced a weekly program on combat sports for SiriusXM radio.

Ciro also practices law as a Major with the Delaware Army National Guard. Since the fall of 2017, Ciro has been the lead attorney for the legal defense of Soldiers statewide. Ciro authored a 250-page tome Defense Counsel Deskbook (2019-20), for which he received the U.S. Army Commendation Medal. He volunteered for active duty during the height of the Covid-19 pandemic.