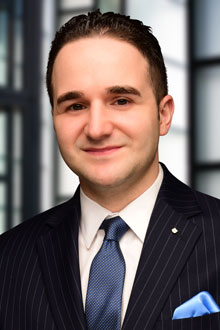 Dean Pillarella is an associate in the New York office of Lewis Brisbois and a member of the Appellate Practice.

Prior to joining Lewis Brisbois, Mr. Pillarella was an associate attorney and primary appellate counsel at a corporate and insurance defense firm in New York City, where he handled matters from inception through trial and appeal. Notably, his briefing and argument in Belfand v. Petosa, 196 A.D.3d 60 (1st Dep’t 2021), culminated in a signed opinion of the Appellate Division, First Department, effectively preventing private suits against the State of New Jersey in New York as a matter of constitutional law. The opinion was subsequently cited by the Supreme Court of Alabama and published in the New York Law Journal and the New York City Bar Association’s CPLR 2021 Update. In Belfand’s companion matter, Henry v. New Jersey Transit, Mr. Pillarella authored jurisdictional letter-briefs at the Court of Appeals stage that culminated in the Court’s acceptance of the matter of right on constitutional grounds.

Prior to joining the defense bar, Mr. Pillarella was an associate at a Brooklyn, NY, plaintiffs’ firm where he handled state and federal commercial, civil rights, and torts matters from inception through appeal.

Outside of the office, Mr. Pillarella is a proud member of the United States Coast Guard Reserve, where he serves as an officer and staff attorney.

Mr. Pillarella is also an avid writer and student of the law with a passion for New York civil practice. He has professionally published on topics ranging from New York civil practice, to constitutional and civil-rights law, to criminal law and procedure. His essay Utilizing CPLR 2001 to Cure Service Defects: 10 Years of Ruffin was featured in the New York Law Journal to commemorate the tenth anniversary of Ruffin v. Lion Corp., 15 N.Y.3d 578 (2010), and its increasing impact on New York service of process. His essay The Informal Appearance, Its Origins, Instances, and Impact, was recently cited by the New York State Academy of Trial Lawyers as providing a thorough discussion of the doctrine of the “informal appearance” in New York civil practice.

Mr. Pillarella earned his Juris Doctor from the Elisabeth Haub School of Law at Pace University in 2018. He earned a Bachelor of Arts in philosophy and history from the University of Scranton in 2015.