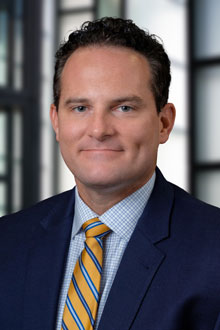 Randall Nice is an associate at the Phoenix office of Lewis Brisbois and represents individuals, contractors, and businesses in areas such as premises liability, wrongful death, and personal injury. Mr. Nice began his legal career as a judicial law clerk for Justice John Lopez IV at the Arizona Supreme Court. He then worked as a law clerk in the appellate unit of a civil defense firm where he drafted substantive motions for matters such as municipal liability, 42 U.S.C. 1983 defense, and wrongful death.

Prior to his legal career, Mr. Nice served for over a decade as a sheriff's deputy in Southern Arizona. His career included assignments in the DUI, Motor, and Canine units. He received substantial training and experience conducting investigations and interviews. He also passed his department's SWAT certification course and attended trainings involving police civil liability and use-of-force issues. A significant portion of his career focused on investigating traffic matters including criminal traffic offenses, DUIs, and collisions involving death and serious injuries. These experiences are invaluable in aiding Mr. Nice in the representation of his clients.

"Reviving the Lost Tort of Defamation: A Proposal to Stem the Flow of Fake News." Arizona Law Review, Spring 2019