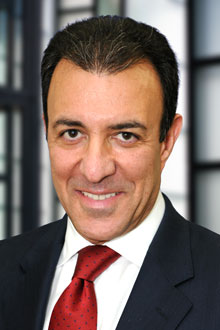 David Nahai is a partner in the Los Angeles office of Lewis Brisbois and a member of the Real Estate & Land Use Practice. An acknowledged expert in real estate, energy, water and environmental matters, Mr. Nahai has over 30 years of experience, and has represented clients and performed transactions at the highest levels, working on complex matters and supervising teams of attorneys. Mr. Nahai is an AV rated lawyer. He has also served as the Commission President and General Manager of the Los Angeles Department of Water and Power, Chair of the Los Angeles Regional Water Quality Control Board, and Senior Advisor to the Clinton Climate Initiative.

Until October, 2009, David Nahai served as the Chief Executive Officer and General Manager of the Los Angeles Department of Water and Power (LADWP), the largest municipal utility in the United States. In this capacity, Mr. Nahai oversaw more than 9,000 employees and an annual budget of more than $4.5 billion. He was the president of the LADWP Board of Commissioners prior to becoming CEO. He was appointed to the Board in 2005 by Mayor Antonio Villaraigosa.

Mr. Nahai led an overall transformation of the LADWP that included the unprecedented expansion of the utility’s renewable energy portfolio; the origination and execution of the City’s groundbreaking Water Supply Plan; the attainment of historic reductions in water consumption in the City; the realization of record breaking energy efficiency levels; and the launch and implementation of water and power infrastructure improvement programs. Under his leadership, the LADWP increased its renewable energy portfolio from approximately 3 percent in 2005 to around 15 percent by the end of 2009, attaining the 20% level in early 2010.

In addition to his expertise in the energy field, Mr. Nahai is widely recognized as a leading expert on water issues. He served for over 10 years on California’s Regional Water Quality Control Board, which safeguards the quality of surface, ground, and coastal waters in Los Angeles and Ventura counties, an area with over 11 million residents. In this capacity, Mr. Nahai served in the administrations of three separate California Governors. Mr. Nahai was elected to an unprecedented four terms as Chairman of the Water Board. Mr. Nahai is credited with reinvigorating the effectiveness of the Water Board and spearheading some of its most progressive programs, especially in the area of coastal protection.

Mr. Nahai has been the recipient of numerous awards and commendations. In 2003, he received the Environmental Champion Award from the Los Angeles League of Conservation Voters. In 2008, he was honored as an environmental leader by Heal the Bay. In 2008, he received the Outstanding Service Award from the Los Angeles Regional Water Quality Control Board. In 2012, he was accorded the Political Leadership Award by the Sierra Club. He has been twice honored for community leadership. In 2013, Mr. Nahai was named one of the "Top Real Estate Lawyers" in Los Angeles by the Los Angeles Business Journal.

Mr. Nahai holds graduate and post-graduate degrees in law from the London School of Economics and the University of California at Berkeley, and was a Visiting Scholar at Berkeley.