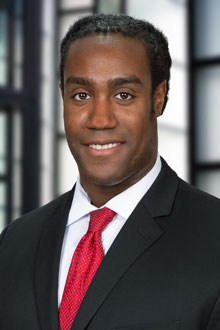 Micah Mtatabikwa-Walker is a partner in the Las Vegas office of Lewis Brisbois and a member of the Transportation, Hospitality, and General Liability Practices.

He primarily defends transit and commercial transportation companies in cases involving collisions and alleged passenger injuries. He also defends hospitality clients against claims of premises liability, slip and falls, and negligent security. And as a General Liability practitioner, he frequently handles the defense of wrongful death and automobile accident claims.

Micah was born and raised in Edmonton, Alberta, Canada, where he developed a strong passion for sports and fitness. A natural athlete, Micah played on his school and local football, track, lacrosse, ski racing, and hockey teams throughout his youth. He then moved to the U.S., where he graduated cum laude from California State University, Fresno, then earned a full-tuition scholarship to St. John’s University School of Law in New York City where he earned his Juris Doctorate. While in law school he interned for two New York Supreme Court judges who presided over family and criminal dockets, and interned with a prominent personal injury firm located inside the Empire State Building.

Micah has called Las Vegas "home" since 2014. When he is not at the office zealously defending his clients, he still loves all things sports and fitness. In his spare time, Micah is a hockey player on a local recreational team, a (now former) competitive powerlifter, and an avid hockey and UFC fan. He also enjoys hiking, grilling, and exploring the local food scene.