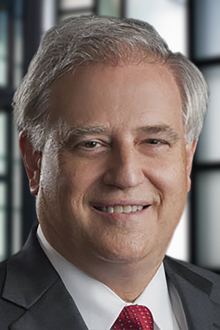 Rick Morgan is a partner in the Minneapolis office of Lewis Brisbois and a member of the Products Liability Practice.

Rick has a national reputation for his aggressive defense of high-exposure litigation across a spectrum of industries. His practice encompasses product liability, commercial, class action and intellectual property litigation involving chemical and electronic products, drug and medical devices, food products and toxic torts for a host of Global 500 companies and industry leaders.

Acknowledged by his opponents as “one of the best cross-examiners” in practice, Rick honed his reputation for efficiency as a federal prosecutor, and his ability to enthrall juries as a political pundit. Clients value his skills in strategic and tactical case evaluation and the development of powerful factual and legal presentations presented with insights that humanize corporations in the eyes of judges and juries.

Rick presents such a compelling case throughout trial preparation that often his cases result in defense settlements prior to trial. Of the more than 45 cases he has tried as first-chair, notable trials include Millenkamp v. Davisco Foods (a commercial matter), in which Rick stepped in to recast the trial strategy after a plaintiff’s verdict was reversed and remanded for new trial; Smothers v. Ecolab, a highly publicized wrongful death case in Texas involving a fire ant attack in a nursing home; Williams v. Ecolab, an Arkansas case brought by a 22-year old man blinded while using chemicals; and Gamma-10 Plastics v. American President Lines, where Rick again stepped in for the retrial of a commercial matter that had also been remanded after a plaintiff’s verdict.

United States District Court for the Western District of Arkansas

United States District Court for the Eastern District of Arkansas

United States Court of Appeals for the Sixth, Eighth, and Eleventh Circuits

Bachelor of Arts, with distinction