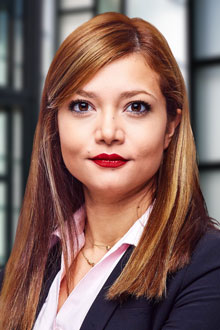 Madison Juschin is an associate in the San Francisco office of Lewis Brisbois and a member of the General Liability Practice.

Madison Juschin earned her B.A. from University of California, Davis and graduated from Golden Gate University School of Law on top 12% of her class. Prior to joining her previous firm, Ms. Juschin worked in litigation in tech companies such as Google and worked on class actions and complex commercial litigation, including Uber Technologies, Inc. suit against subcontractors’ employment allegation, as well as a qui tam case representing the State of California again British Petroleum in a price fixing case at CPM. Ms. Juschin’s prior experience include working on hate speech and privacy regulation at Twitter in Dach-Countries as well as in the United States.

Ms. Juschin has extensive experience defending cases involving large exposures in the areas of products liability, premises liability, medical malpractice, and business litigation. She is also well versed and experienced in arguing motions in both state and federal trial courts and has successfully handled dismissal motions in the past.