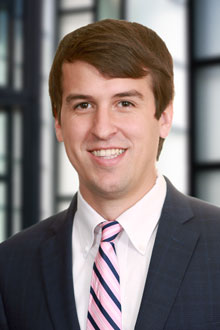 Kyle Hollomon is an associate in the Atlanta office of Lewis Brisbois and a member of the General Liability Practice. Prior to joining Lewis Brisbois in 2019, Kyle gained valuable experience and insight into the legal system as a judicial clerk for three superior courts judges. He is a Double Dawg, having two degrees from the University of Georgia. Kyle graduated magna cum laude from the University of Georgia in 2014 with degrees in political science and international affairs. He also received his Juris Doctor  from the University of Georgia School of Law in 2017. During law school, Kyle was a member of the school's mock trial team, becoming the chairman of the mock trial team his 3L year. Kyle and his partner were the semifinalist team for the J. Melvin England Mock Trial Competition and top eight team for the Buffalo-Niagara Mock Trial Competition in 2016-2017.

Kyle was also a member of Orr Inn of Court, Dean's Ambassador Program, and student justice on Honor Court during law school. He furthered his experience as the research assistant for Professors Elizabeth Chamblee Burch and Julian A. Cook. Personally, he enjoys spending time with his family and friends, trying new and different cuisines, and rooting for the Georgia Bulldogs.