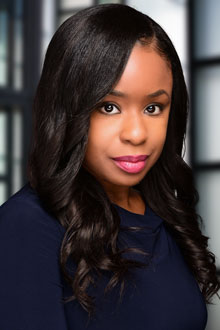 Akosua Goode is an associate in the New York Office of Lewis Brisbois and a member of the General Liability, Medical Malpractice, and Healthcare Practices. After graduating from law school in 2011, she began her career as a criminal prosecutor at the Kings County District Attorney’s Office before joining the New York City Law Department in 2017 as an attorney in the Tort Division.

A Brooklyn native and a product of the New York City public school system, Akosua earned her Bachelor of Arts degree from St. John’s University, and went on to attend Harvard Law School, where she earned her Juris Doctor degree in 2011.

Akosua began her legal career as a prosecutor at the Kings County District Attorney’s Office. As an Assistant District Attorney, Akosua prosecuted a variety of criminal offenses, ranging from homicides, robberies and assaults to lower-level offenses, including vehicular crimes and larceny offenses. Her duties in that role included regular courtroom appearances, conferencing cases with judges and defense counsel in preparation for trial or as part of plea negotiations, and interviewing law enforcement agents and victims of crimes. She also participated in misdemeanor and felony hearings and trials as a lead prosecutor and as an assistant prosecutor.

As an Assistant Corporation Counsel at the New York City Law Department, Akosua’s duties included making court appearances for conferences and oral argument on pending motions, preparing and responding to discovery demands, conducting depositions of plaintiffs, defending depositions of City employees and witnesses, and drafting memorandums of law. As an attorney in the Law Department’s Tort Division, Akosua conducted dozens of plaintiffs’ depositions, and defended nearly fifty depositions of City defendants and witnesses. She also regularly researched issues of law pertaining to claims of false arrest, malicious prosecution, negligence, employer liability, and other tort claims, in order to evaluate the merits of each claim. In addition to these duties, she also prepared written memorandums summarizing key issues of fact and law in each case in preparation for settlement negotiations, and personally negotiated settlement of several matters.

In both her roles as an Assistant Corporation Counsel and a criminal prosecutor, Akosua gained extensive experience conducting an in-depth review and analysis of medical records of crime victims and civil litigants.

As an Assistant Corporation Counsel, Akosua represented City employees in defending against tort claims, including federal § 1983 claims for excessive force, and state law claims for battery, in which plaintiffs would commonly allege to have sustained physical injuries of various degrees of severity. Effectively defending against these claims required Akosua to review often voluminous records of the plaintiff’s medical treatment, including emergency room treatment, surgical procedures, films and imaging, physical therapy, and psychological treatment, in order to evaluate the extent of the injuries and determine the monetary value of the claim.

In her role as a criminal prosecutor, Akosua prosecuted many felony assault cases, which required a showing that the victim sustained physical injury, often serious. In order to successfully prosecute these matters and sustain the criminal charges, Akosua was required to review records of the victims’ medical treatment in order to evaluate the extent of their injuries.

Akosua is a seasoned litigator whose experience as a criminal prosecutor and a civil defense attorney brings a unique prospective to her work in the courtroom.