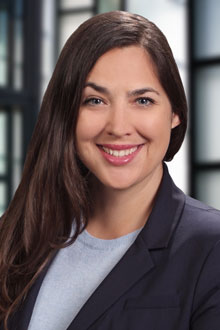 Kayla Dreyer is a partner in the Denver office of Lewis Brisbois, whose practice focuses on trade secrets and commercial litigation and employee mobility disputes, as well as traditional labor and employment issues.

Kayla’s practice is truly nationwide, as she regularly litigates and represents clients in jurisdictions throughout the United States. She retains deep ties throughout her home state of Texas, as well as New Mexico (where she completed a federal judicial clerkship before moving to Colorado).

Giving back to the community has always been one of Kayla's priorities. She is currently an officer on the Colorado Bar Association Litigation Section Council, and has served in numerous leadership roles with the Junior League of Denver. In her leisure time, Kayla enjoys hiking, skiing, running, vegan cooking, and traveling. She is an avid sports fan, and you will often find her cheering on the Texas Longhorns or at a Colorado Rockies game.

The University of Texas School of Law

The University of Texas-Pan American