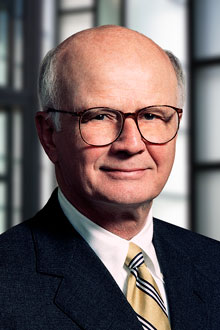 Ronald Dilthey is an of counsel in the Raleigh office of Lewis Brisbois and a member of the Professional Liability Practice. His practice is concentrated in the areas of products liability, business and medical practice litigation, covenants not to compete, professional malpractice, and wrongful death claims and suits. Mr. Dilthey is actively practicing before federal and state courts of the State of North Carolina, the United States Court of Appeals for the Fourth Circuit, and the Supreme Court of the United States of America. Additionally, he practices before many administrative tribunals, including the North Carolina Industrial Commission and the Disciplinary Hearing Commission of the North Carolina State Bar.

He received his Bachelor’s Degree from Wake Forest University and his Bachelor of Law Degree from the Wake Forest University School of Law. Mr. Dilthey served as an adjunct Professor of Law at Campbell University’s Norman Adrian Wiggins School of Law for 35 years, teaching in the areas of workers’ compensation and civil litigation techniques. He was the North Carolina Bar Association’s Annual Lecturer at its Practical Skills course on the subject of workers’ compensation from 1968 to 1996.