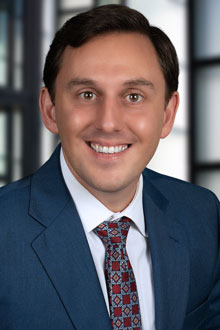 Andrew Darlington is an associate in the Fort Lauderdale office of Lewis Brisbois and a member of the General Liability practice.

Andrew commenced his legal career as an Assistant State Attorney at the Miami-Dade State Attorney Office in the Eleventh Judicial Circuit of Florida. Andrew had a high success rate in pre-trial motion practice, oral arguments, and evidentiary hearings, and served as either first or second chair in five jury trials. Andrew was also a member of the Police Accountability and Integrity Team, which was a newly formed unit with selected prosecutors prosecuting cases of alleged or charged criminal conduct by police. Overall, Andrew managed a high-volume case load from initial filing through verdict with professionalism in the courtroom and in dealings with opposing counsel.

Prior to becoming an attorney, Andrew graduated the United States Naval Academy in Annapolis, Maryland, and commissioned as a Second Lieutenant in the United States Marine Corps. After becoming an infantry officer, Andrew deployed twice to Afghanistan’s Helmand Province in support of Operation Enduring Freedom. For his service, Andrew was awarded the Purple Heart and other personal combat awards. Andrew remains an advocate for Afghans who assisted the NATO mission and their families as they seek asylum or residency in the United States or other NATO countries.

Coordinating the emigration of Afghans who assisted NATO countries and their families.