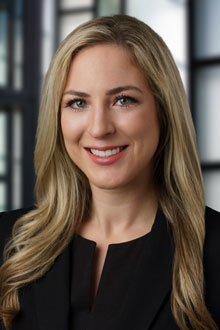 Andree Comeaux is an associate in the New Orleans office of Lewis Brisbois and is a member of the Labor & Employment, Insurance Coverage and Professional Liability Practices. Ms. Comeaux received a Bachelor of Science degree in Economics from Louisiana State University in 2015 where she was named a member of the Tiger Twelve Class of 2015 and a recipient of the 2015 Arden O. French Leadership Award. Ms. Comeaux received her Juris Doctor and Graduate Diploma in Comparative Law from Louisiana State University Paul M Hebert School of Law in 2018 where she served as both Executive Secretary and Executive Treasurer on the Student Bar Association.

Ms. Comeaux is admitted to practice in all state and federal courts in Louisiana.

Member, Club Blue of the Boys & Girls Clubs of Acadiana

United States District Court for the Middle District of Louisiana

United States District Court for the Western District of Louisiana

CALI Excellence for the Future Award – Legal Research and Writing