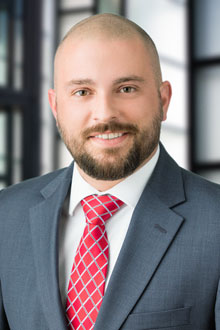 Patrick R. Charest is an associate in the Salt Lake City office of Lewis Brisbois and a member of the General Liability Practice.

Prior to attending the University of Toledo, Patrick served a full-time mission for The Church of Jesus Christ of Latter Day Saints in Rosario, Argentina where he learned to speak Spanish fluently. Upon returning from Argentina, Patrick attended the police academy in Cincinnati, Ohio and was subsequently hired as a patrol officer in Sylvania Township, Ohio.

Between 2009-2019, Patrick worked as a police officer and K9 handler for the Sylvania Township Police Department with a focus on narcotics enforcement and DUI apprehension and prosecution. He worked with K-9 Speedy, who was a dual purpose K-9, certified in both narcotics detection and criminal patrol functions. Patrick has received certificates in crisis intervention, SFSTs, ARIDE (Advanced Roadside Impaired Driving Enforcement, and the REID Interview Method. During his time as a police office, he has gained valuable experience reporting and investigating motor vehicle accidents, which allows him to quickly analyze the quality of many motor vehicle injury cases.

During his study at Toledo Law, Patrick actively worked on cases for the Hispanic Community. He was one of the few Spanish Speaking lawyers in the area, helping Latino families navigate the juvenile court system and domestic relations court system in Toledo, Ohio.

Patrick is registered in the Utah State Bar and Ohio State Bar.