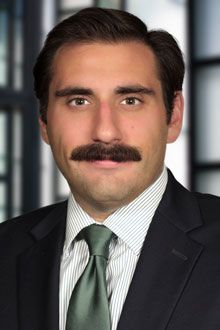 Joseph T. Baratta is an associate in the Phoenix office of Lewis Brisbois and a member of the Complex Business & Commercial Litigation, Autonomous Vehicles and Transportation Practices. Mr. Baratta has experience in all phases of litigation including trials, and practices in both state and federal courts. Mr. Baratta’s current practice is focused in matters of freight loss, damage claims, and transportation, representing shippers, carriers, brokers and intermediaries.

Prior to joining Lewis Brisbois, Mr. Baratta was an associate attorney in a mid-size Chicago law firm concentrating his practice in commercial litigation, insurance coverage disputes, employment litigation, and construction law at both the state and federal level.

Mr. Baratta completed his undergraduate studies at the University of Iowa in 2014 where he earned a degree in Political Science. Mr. Baratta then returned to Chicago to attended DePaul University College of Law, during which time he wrote for DePaul’s Journal of Health Care Law and was an active member in the Jaharis Health Law Institute. While at DePaul, Mr. Baratta was named to the Dean’s List multiple semesters and also earned a CALI award (highest grade in the class) in Wills & Trusts. Outside the classroom, Joseph served as a judicial extern for Justice Robert E. Gordon on the Illinois Appellate Court during the Fall semester of 2016. Mr. Baratta graduated from DePaul University College of Law, with honors, in 2017 and was admitted to the Illinois bar that same year. He has also been admitted to practice in the state of Arizona as well as the United States District Court for the Northern District of Illinois.